Mosquitoes have been around longer than the human race itself. And ever since humans first emerged, mosquitoes have been our enemy. Their bites are not only itchy but can also carry incredibly harmful diseases. All that being said, when you stop and take a closer look at this pesky pest, you’ll be surprised at home interesting they are. Keep reading to discover fascinating things about the world’s most hated insect.

Why Mosquitoes Are One Of Nature’s Most Interesting Animals

You’ve probably heard the phrase “Everything’s bigger in Texas,” and that goes for the number of mosquitoes as well. There are over 3,000 species of mosquitoes in the world, and, unfortunately, Texas has the lucky distinction of being home to 85 different species. However, out of thousands of different species, only a 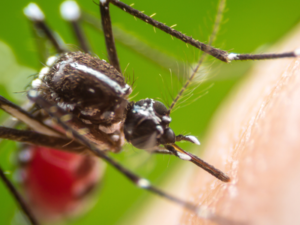 few hundred need to drink blood. Some blood-sucking mosquitoes don’t prey on humans at all! Instead, some species only go after frogs, others snakes, and still others birds.

Yes, really! This is probably the most surprising thing you’ll learn about mosquitoes – if you didn’t know this already – but mosquitoes don’t actually consume the blood for nutritional value in the same way we eat food. Rather, mosquitoes need the blood so their eggs can reach maturity inside the momma mosquito before she lays them. Mosquitoes eat plants just like many other bugs. And on that note:

It’s true! Only female mosquitoes need blood to finish their reproductive cycle, and male mosquitoes eat plant nectar just like bees do. So if you have a yard with loads of flowers, you’re probably going to notice more mosquitoes than your neighbors. But that being said, you can use flowers to your advantage.

Even though mosquitoes feed on the nectar of flowers to survive, that doesn’t mean you need to rip out your garden. Many of the most popular flowers and herbs are naturally mosquito repellants. Plants like:

It’s a win-win! You’ll get to have flavorful and aromatic herbs and flowers in your yard while repelling mosquitoes at the same time! Why not put these natural mosquito control solutions to work?

Remember when we said that mosquitoes are older than the human race itself? The fossil record indicates that mosquitoes have been around for at least 210 million years ago! This means that mosquitoes were around in the time of the dinosaurs, which means that the mosquito from Jurassic Park could have happened in real life! DNA extraction and cloning is a whole other ball game, and we won’t get into that here. But we do know for sure that mosquitoes shared the planet with dinosaurs at one point.

At first. When mosquitoes begin their life, they need to live in water – just like frog tadpoles do. That’s why you may notice an increase in mosquitoes after heavy rain. Female mosquitoes need sources of still standing water where they can lay their eggs. With this in mind, one of the easiest ways to help discourage 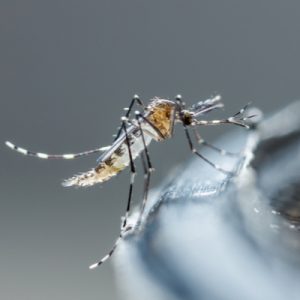 mosquitoes in your yard is to be on the lookout for places where water can puddle. Think flower pot saucers, old tires, birdbaths, or low-lying areas of the lawn.

If you’ve ever wondered, female mosquitoes can hold about 0.000005 of a liter of blood, which is about 2 or 3 times her body weight. That would be the equivalent of you drinking hundreds of gallons of liquid! When you do the math, it becomes quite an astonishing feat!

When female mosquitoes need that precious blood to grow their brood, they have been recorded flying as far as three miles a day. And once again, this may not seem impressive at first glance, but when you consider the size of a mosquito compared to a human, and how long it takes us to run a mile, it really does make you think. Even though we don’t want them around, mosquitoes are way tougher than we give them credit for.

Mosquitoes Are Attracted To Alcohol

According to the National Library of Medicine, mosquitoes are more attracted to people after a few beers. So if you like to enjoy a beer on your deck or patio, you might want to consider insect control.

Believe it or not, mosquitoes are responsible for more human deaths than any other cause. Even when you consider all the wars humans have engaged in over the years, they can’t hold a candle to the devastation wrought by mosquitoes. 250 million people are infected with malaria every single year, and of those victims, one million will die. A quarter of a billion people every year! All because of an annoying tiny insect.

Just because the temperature is cooler doesn’t mean that mosquitoes aren’t on the prowl. They can easily remain active as long as the weather is above freezing. Give your family the protection they deserve and extend patio season with professional mosquito control for your backyard from Cramer Pest Control. No more smelly bug repellant, annoying bites, and harmful diseases. Get back to enjoying your outdoor space once again! Call (704) 763-0204 for service in North Carolina and (803) 802-7540 for customers in South Carolina. Or you can leave us a message through our online form.

We hope you enjoyed this blog, and if so, you can learn more about keeping your home and yard pest-free by checking out past blog posts here. And don’t forget to like our Facebook page!