We have all been bitten or stung by an insect before, so we know how excruciating it can be. But have you ever wondered which insects have the most painful sting? Most of us will cringe at just the thought of being stung, but one man made it his career. Justin O. Schmidt, an entomologist, made it his personal goal to rank the most painful insect stings in the world. The only test subject was himself, so he exposed himself to thousands of stings, all in the name of science. Schmidt also invented a scale from 0 – 4  to measure the intensity of insect stings so people like us can imagine how painful stings can be. We are all thankful for the work that Schmidt has done so we have created a list of the top 5 painful stings, according to the Schmidt pain index.

Let’s start with something mild. Red Fire Ants are an invasive species that are originally from South America. They can live in colonies that can number in the millions and cause real problems when they invade our yards. Not only do they create ugly mounds that can kill your grass, but they can also pose a threat to you and your family. These little red ants are known for one thing; their sting. Shmidt said their stings were “sharp, sudden, mildly alarming” and are “like walking across a shag carpet and reaching for the light switch.”

Another sting you might be familiar with in North Carolina is the paper wasp sting. Paper wasps are very common in our state. Wasps make their homes under the eaves of houses, behind shutters, in sheds, garages, pretty much anywhere that is out of the rain. Paper wasps are generally black with yellow stripes. They have slender bodies with a distinct constriction of the body between the thorax and abdomen. Paper wasps look similar to and are commonly mistaken for yellowjackets, however yellow jackets have a more compact body and their hind legs do not dangle when they fly. They are not as aggressive as yellowjackets but they will sting if disturbed. Schmidt describes the pain as, “Burning, throbbing and lonely. A single drop of superheated frying oil landed on your arm.”

An example of an insect with a level 3 bite, according to Schmidt, is the velvet ant. These wingless and beautifully scary insects are not actually ants but members of the wasp family. They get their name from the pretty orange hairs on their bodies. Here’s a fun fact; velvet ants have one of the longest stingers in relation to body size in the insect kingdom! People usually encounter females as they emerge from their burrows to look for mates and new nesting grounds. While not aggressive, they can and will defend themselves if threatened. The pain of a velvet ant sting is considered the 4th painful in the world, and Schmidt himself describes it as “Instantaneous, like the surprise of being stabbed. Is this what shrapnel feels like?”

Thankfully we do not have the next insect living in our state. As you would imagine, the tarantula hawk wasp is a very large wasp that feeds primarily on tarantulas. These wasps take the prize as the world’s most painful wasp sting. How big are these wasps? They can reach up to 4 inches long with a stinger that is 1/3 to 2/3 of an inch long. Tarantula hawks hunt tarantulas and usually always win. Their sting paralyzes the spider but does not kill it. The female then deposits her eggs inside the spider’s body so when they hatch, they have a warm meal to eat. When one of these wasps stings a human, Schmidt describes it as “Torture. You are chained in the flow of an active volcano. Instantaneous, electrifying, excruciating, and totally debilitating. Blinding, fierce, like a running hairdryer, has been dropped into your bubble bath.”

Some people can tell just by the name that an insect is bad news. But to Schmidt is was a challenge. Unfortunately, Schmidt only made his scale go up to 4, but the sting of the bullet ant could be in a category all its own. The king of stings belongs to the humble bullet ant. Bullet ants live in the tropical jungles of South 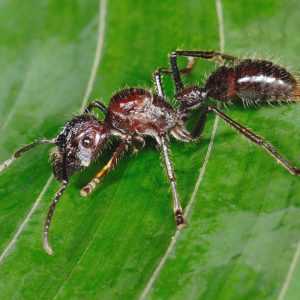 America where the Satere-Mawe Tribe uses them as a part of a manhood ritual. The unfortunate boy must put his hands in woven gloves filled with bullet ants and endure the pain for ten minutes. Schmidt described the sting of the bullet ant as, “pure, intense, brilliant pain. Like walking over flaming charcoal with a 3-inch nail embedded in your heel”

Protect you and your family from painful insect stings. Call the professionals at Cramer Pest Control. We have years of experience dealing with pests of all shapes and sizes. If you want to protect your home from fall pests this year, then ask about our residential pest control program.

Own a business? With our commercial Pest Control program, we can save your small business from being overrun with pests.

Don’t wait for the problem to get out of control, if in North Carolina, call us now at (704) 763-0204.   In South Carolina, call us at (803) 802-7540 to get started. You can also contact us here for more information. Don’t forget to follow us on Facebook for the latest deals and check our blog for monthly pest control tips and tricks.